It will be possible to trigger small, slow moving sluffs on all aspects, at all elevations, on slopes 35-40° steep. It will be likely to trigger medium sized sluffs on slopes 45° and steeper. These will run longer distances and in some cases entrain older snow, increasing the volume. Natural loose dry avalanches are unlikely today.

Be cautious as these sluffs will be able to catch and carry you into other hazards such as rock and cliffs, and if they funnel you into terrain traps, such as creeks, or low points in the terrain, it may have enough volume to bury a person.

Despite some social media posts depicting epic conditions, it’s important to note that snow coverage is still thin, and rocks are a very real hazard. If you are a skier or snowboarder, bring your rocks boards and save your new boards for Turnagain. 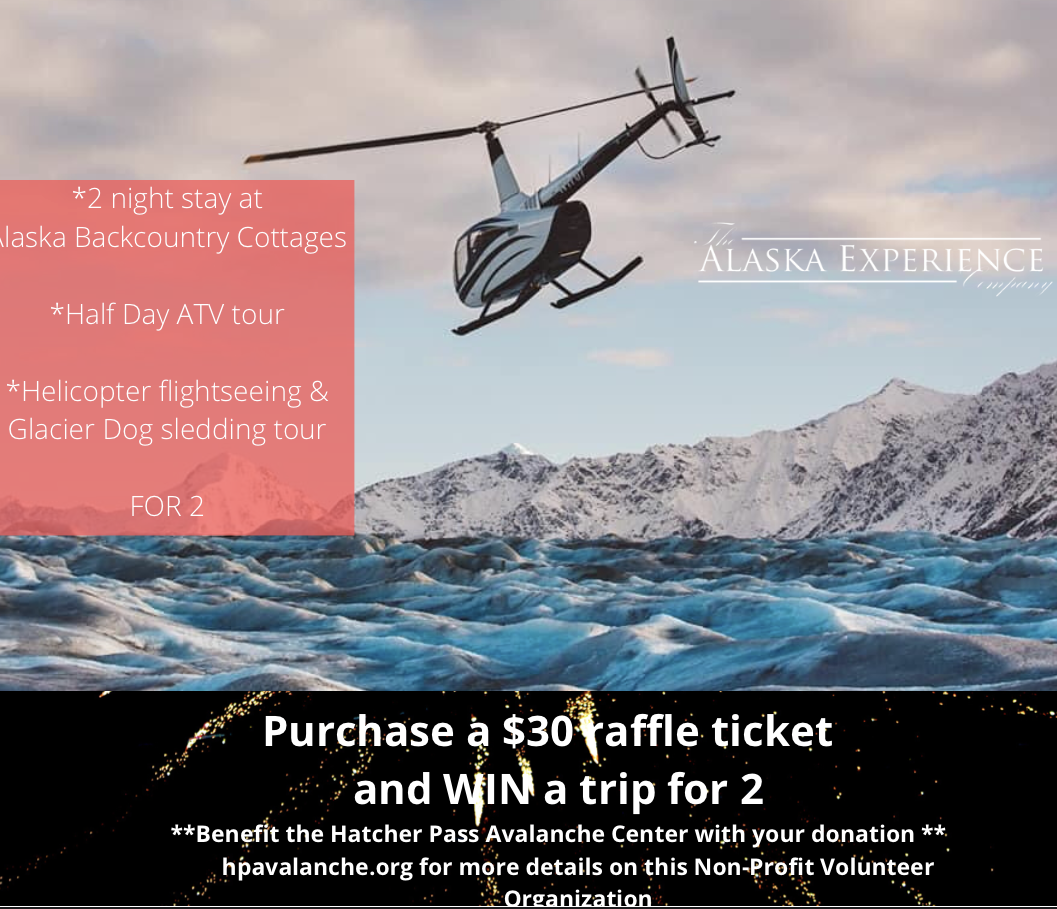 BUY YOUR TICKETS BEFORE FEB 13th!

Don’t miss out on this month’s raffle from The Alaska Experience Company. Buy a $30 ticket to support forecasting and HPAC.    The total value of this prize is $1775!

Includes (for 2 people): 2 Night stay at Alaska Backcountry Cottages (in the butte)
Helicopter flight for 2 and Glacier Dog Sled Tour on Troublesome Glacier
Half Day ATV tour leaving from ABC in the butte.

Tickets available at Ski AK and Hoarding Marmot in Anc., Backcountry Bike and Ski in Palmer, Denali Climbing at the Rock in Wasilla, or find a board member. $30 Cash or check only. Raffle will be held on February 13th. 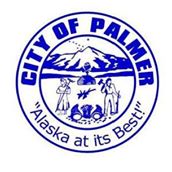 The majority of avalanche activity this week has been loose dry avalanches. There is widespread evidence of this problem, both natural which occurred during and just after storms, and human triggered. 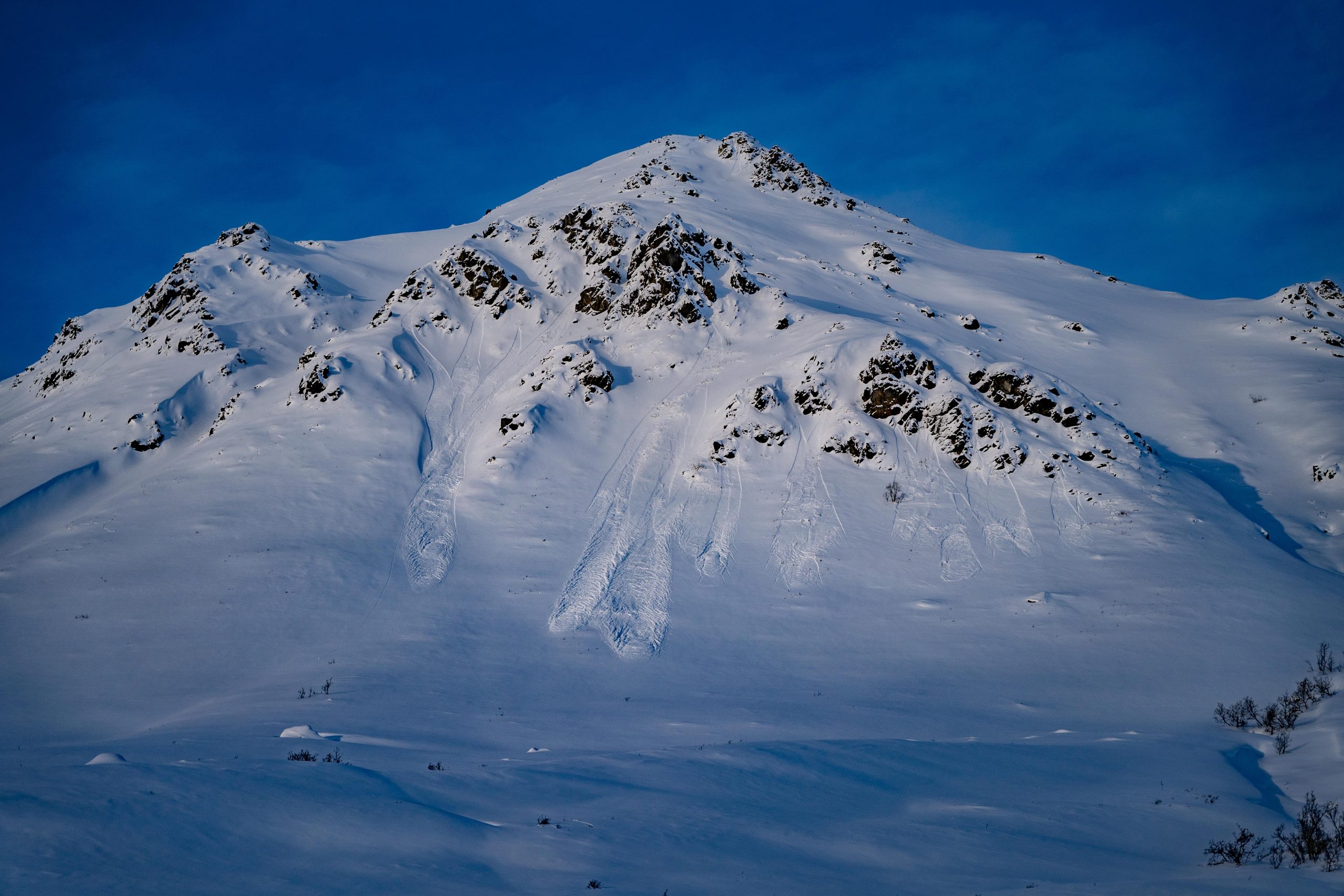 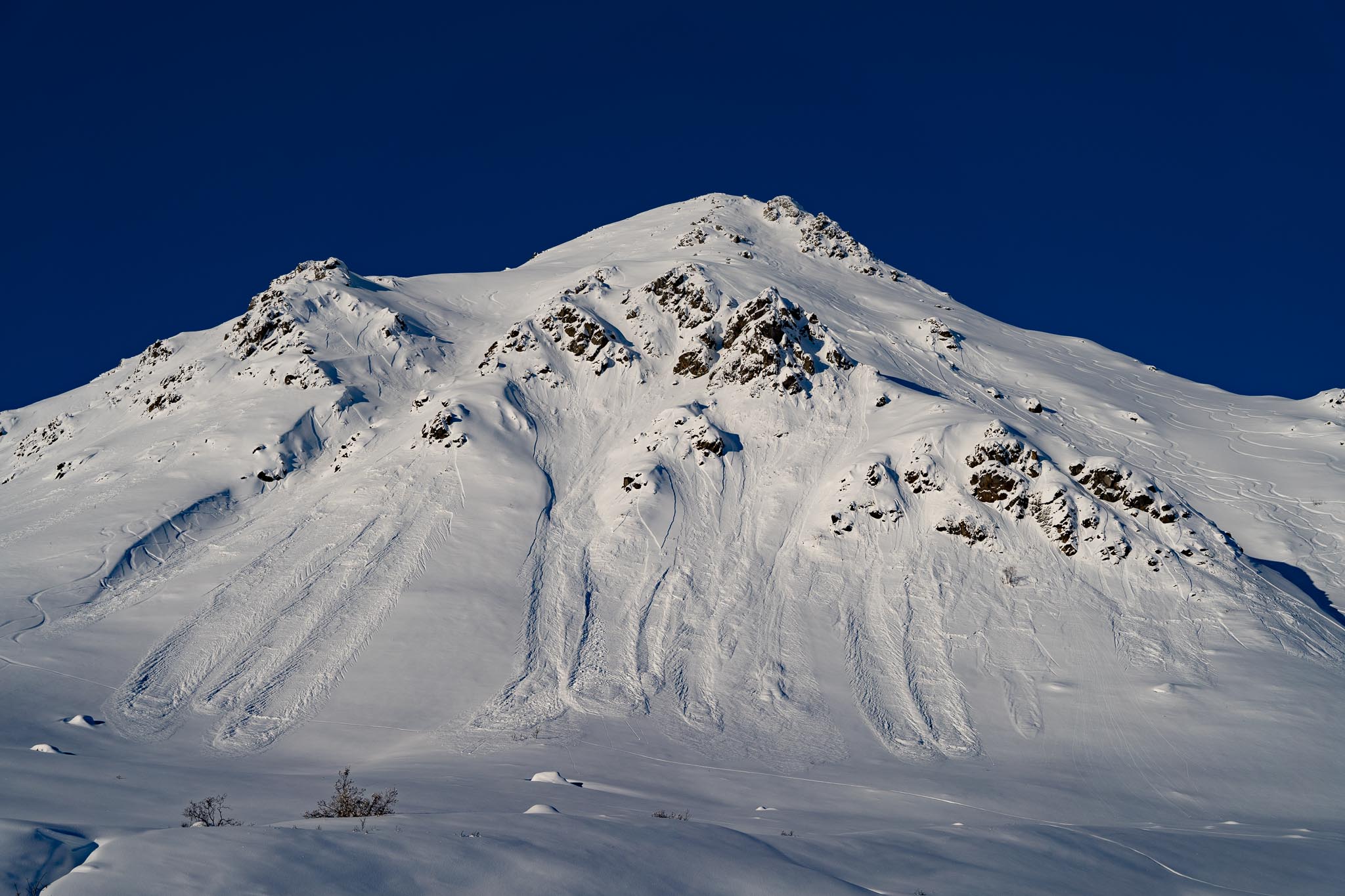 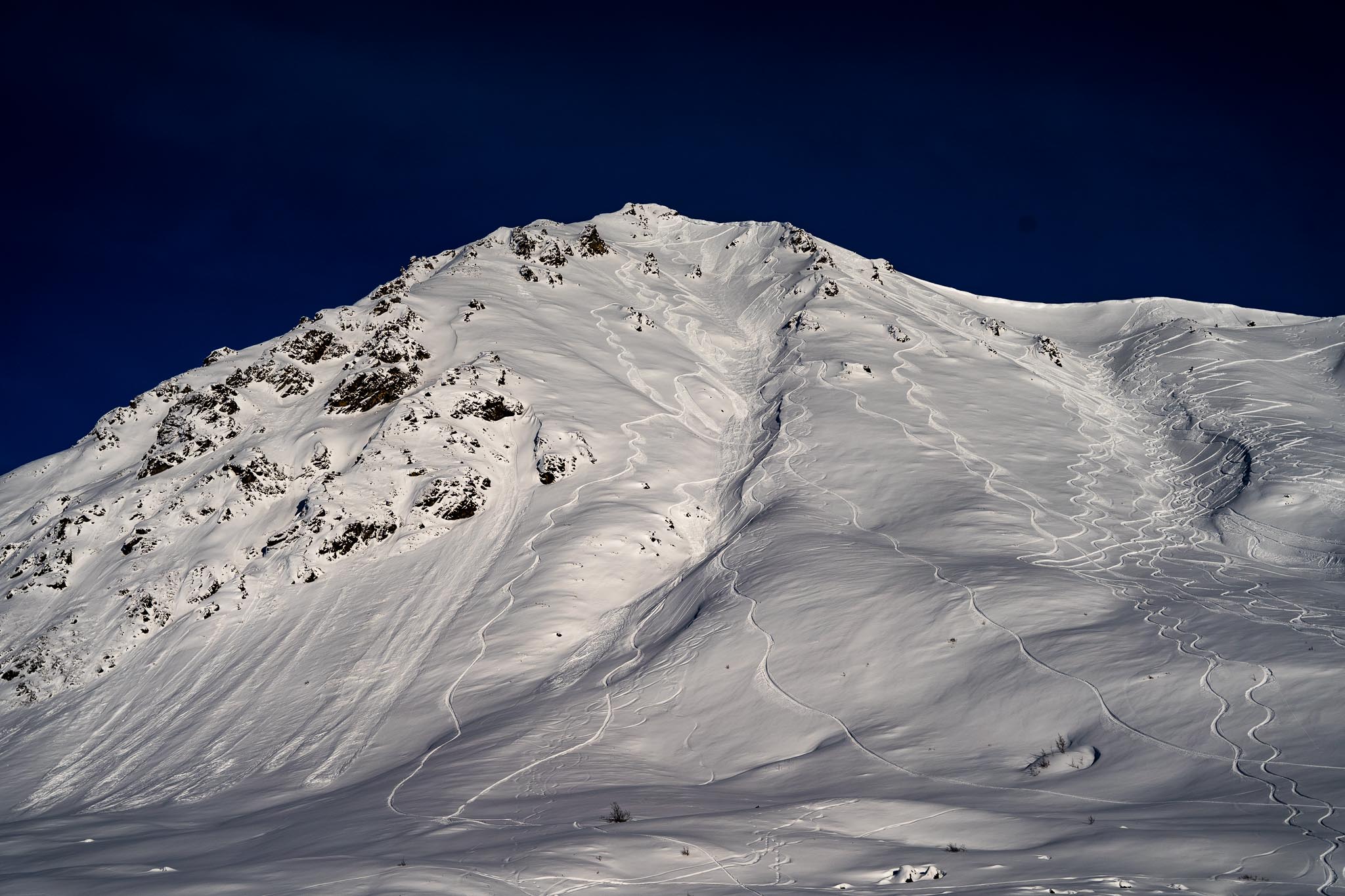 Some very isolated and small slab avalanches failed during and just after the Feb 2-3 storm. The new snow is struggling to be cohesive enough to act like a slab, and evidence of this is rare. 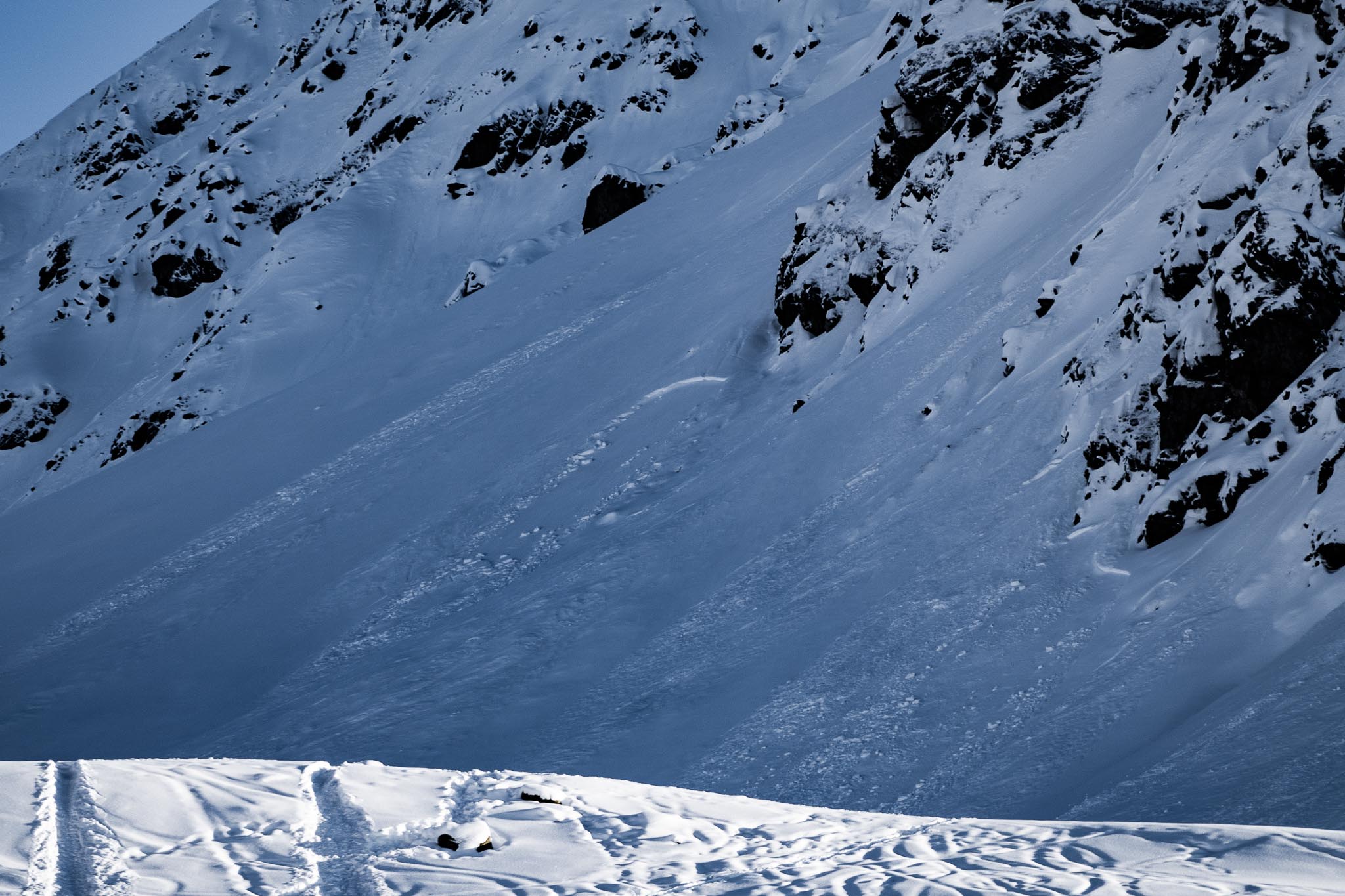 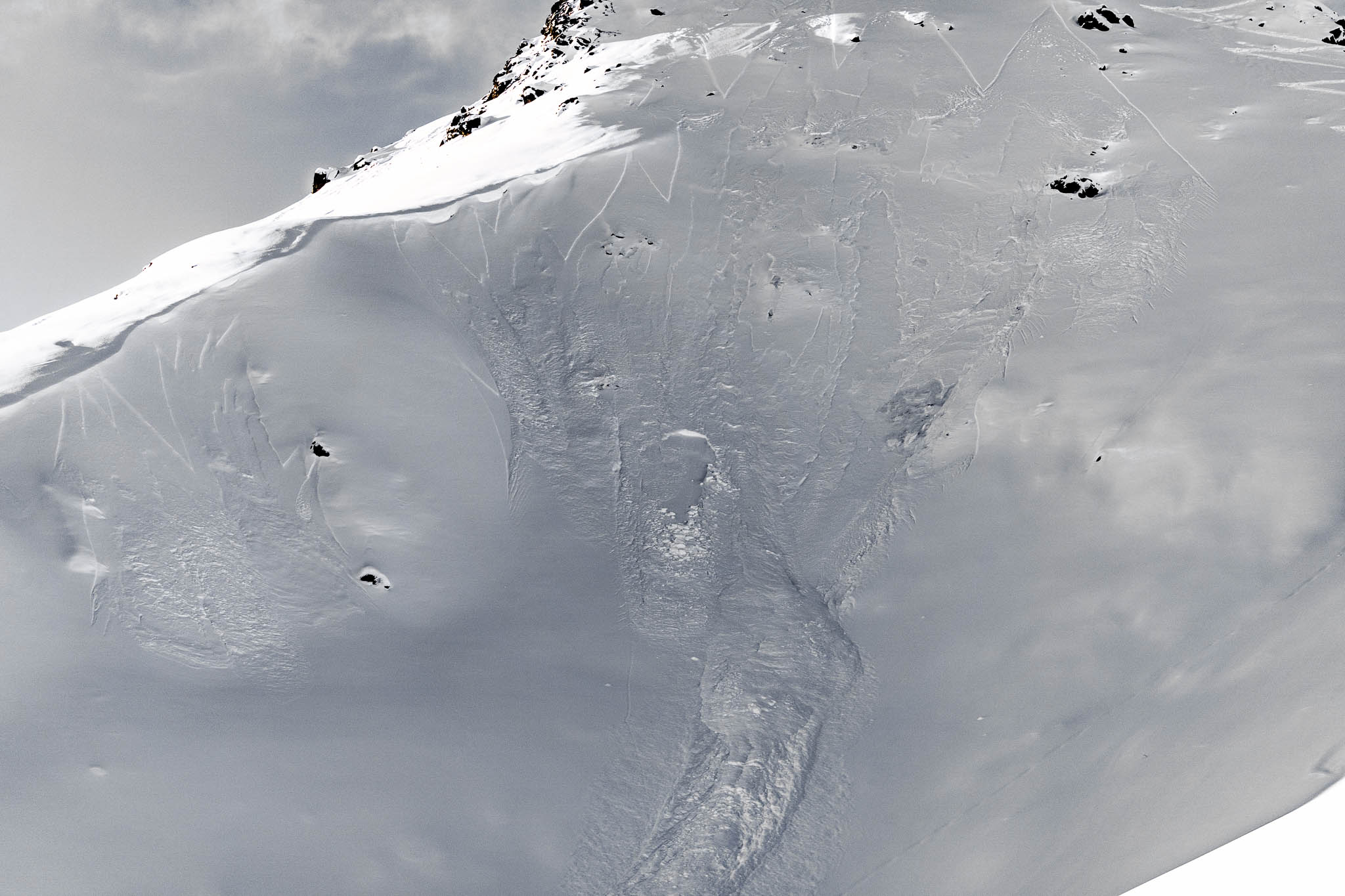 February 2-3 brought 6-10″ of new snow which sits in old, weak, faceted snow.  It will be possible to trigger small, slow moving sluffs on slopes around 35-40° in the newer low density, “light” snow. On slopes 45° and steeper, it is likely to human trigger loose dry avalanches. These will run longer distances, may entrain older, faceted snow, and could produce larger volume sluffs running at moderate speeds.

If you want to avoid this hazard, it’s simple, just stay on slopes 35° and less.

On the more continuous steeper slopes, sluff management will be essential and effective. Getting caught up in a loose dry avalanche may have the potential for tweaking a knee or other similar injury. Be extra cautious when riding above cliffs, or shallowly buried hazards such as rocks where a sluff could catch and carry you into dangerous consequences.

It’s worth mentioning that despite the good snow conditions and appearance of good coverage, there are shallowly buried rocks everywhere. Snow coverage varies greatly, from just a few inches to over 6 feet, often in just a 50 foot distance across a slope. We don’t have the overall coverage you may be used to in February for the Talkeetna Mountains. For skiers and boarders it is not uncommon to hit rocks on every run. Reports from snow machiners on the Willow side have been similar, with better coverage in the basins. A number of people have damaged their machines this season due to low snow coverage.

Temps at 4500′ have been in the upper teens to 20’s since mid week, with inversions and warmer temps up high. Cloud layers in Palmer have masked the sunshine up at Hatcher Pass. Temps at 3500′ had a low of 4°F and a high of 18°F for the later half of the week. Winds have remained calm to light, mostly from the East.

A short burst of strong winds on Feb 2 was not enough to build dangerous wind slabs, or overload the poor structure of the snowpack, and did not significantly damage the riding conditions. Since then more snow fell and winds have remained calm. Only the very smallest natural slab avalanches in very isolated locations occurred during and just after the recent new snow on the 2nd. As we look forward, pay close attention to the wind speeds and temperatures. Any slab formation will result in increased avalanche danger.

Today skies will have some low clouds very early this morning with better chances for some sun during the daylight hours. The point forecast is calling for Partly Sunny today trending Sunny and clear tomorrow.