Today’s avalanche hazard is MODERATE for LOOSE DRY AVALANCHES at all elevations, on all aspects.

It will be likely to human trigger many, small, dry loose avalanches on slopes 40° and steeper.

Coverage is still shallow and hazards such as rocks loom close to the surface. Taking a ride in an otherwise not so dangerous loose dry avalanche could suddenly become very hazardous if you hit exposed rocks or are swept into an open glide crack.

No new glide cracks or glide avalanches have been observed since 11/8 when the temperatures dropped into the teens.

Natural loose dry avalanches for the 11/11 storm cycle were few.

Below: 11/11 storm slabs likely naturally failed at the new/old snow interface and occurred at the tail end of the storm. The weak layer consists of buried near surface facets and small surface hoar. While this wind protected aspect allowed for wide propagation, other storms slabs observed in this cycle were much smaller. Overall natural storm slab activity was isolated in distribution. 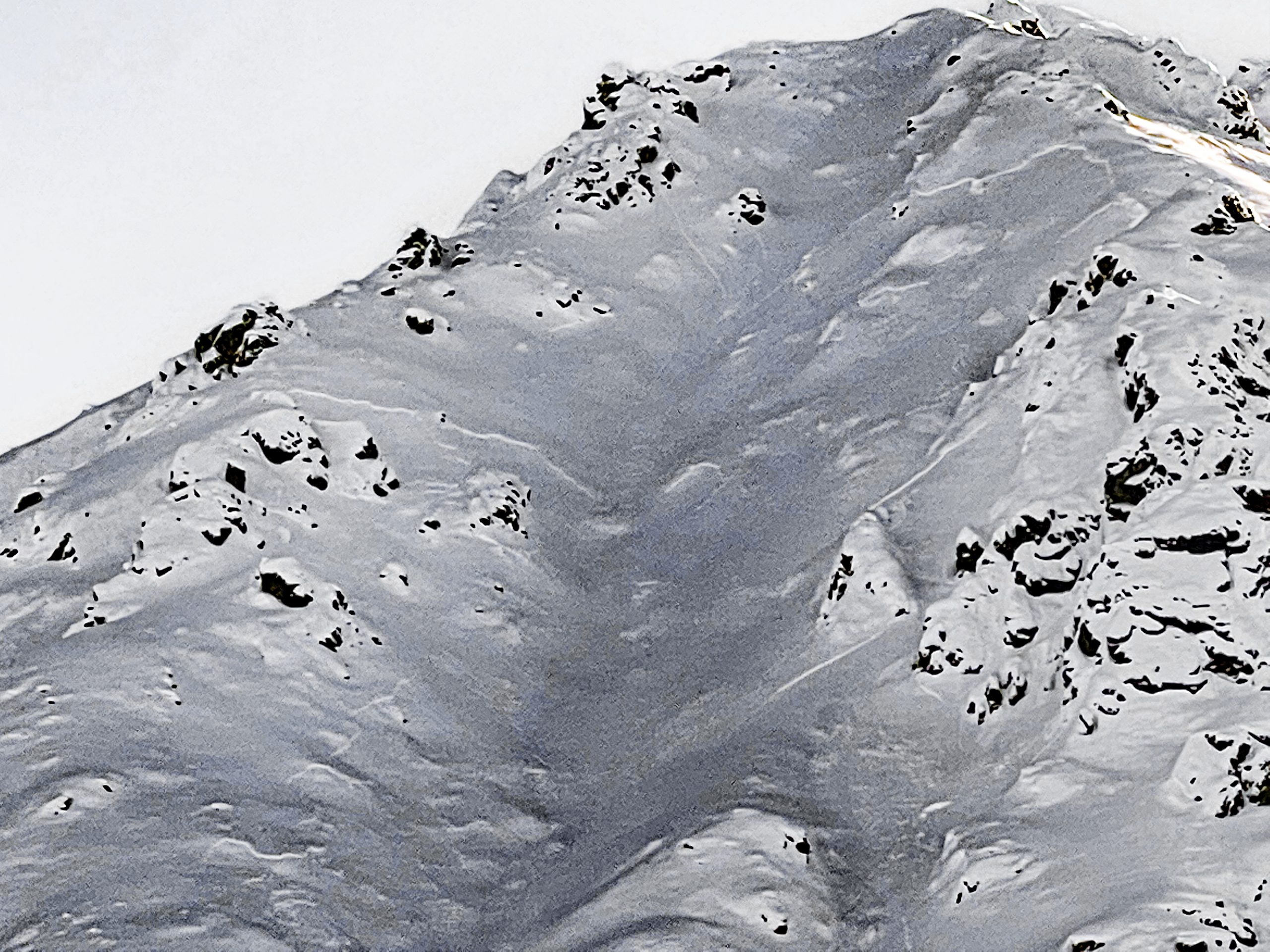 On 11/12 a couple isolated, small, human triggered soft slab avalanches failed at the 11/11 new snow/old snow interface. This interface consists of roughly 10″ of low density (5-7% water) new snow sitting on an older, soft layer of near surface facets and small surface hoar. These two avalanches were isolated, with many tracks in similar areas not producing slab avalanches. These slabs were very soft, just barely able to act as slabs. 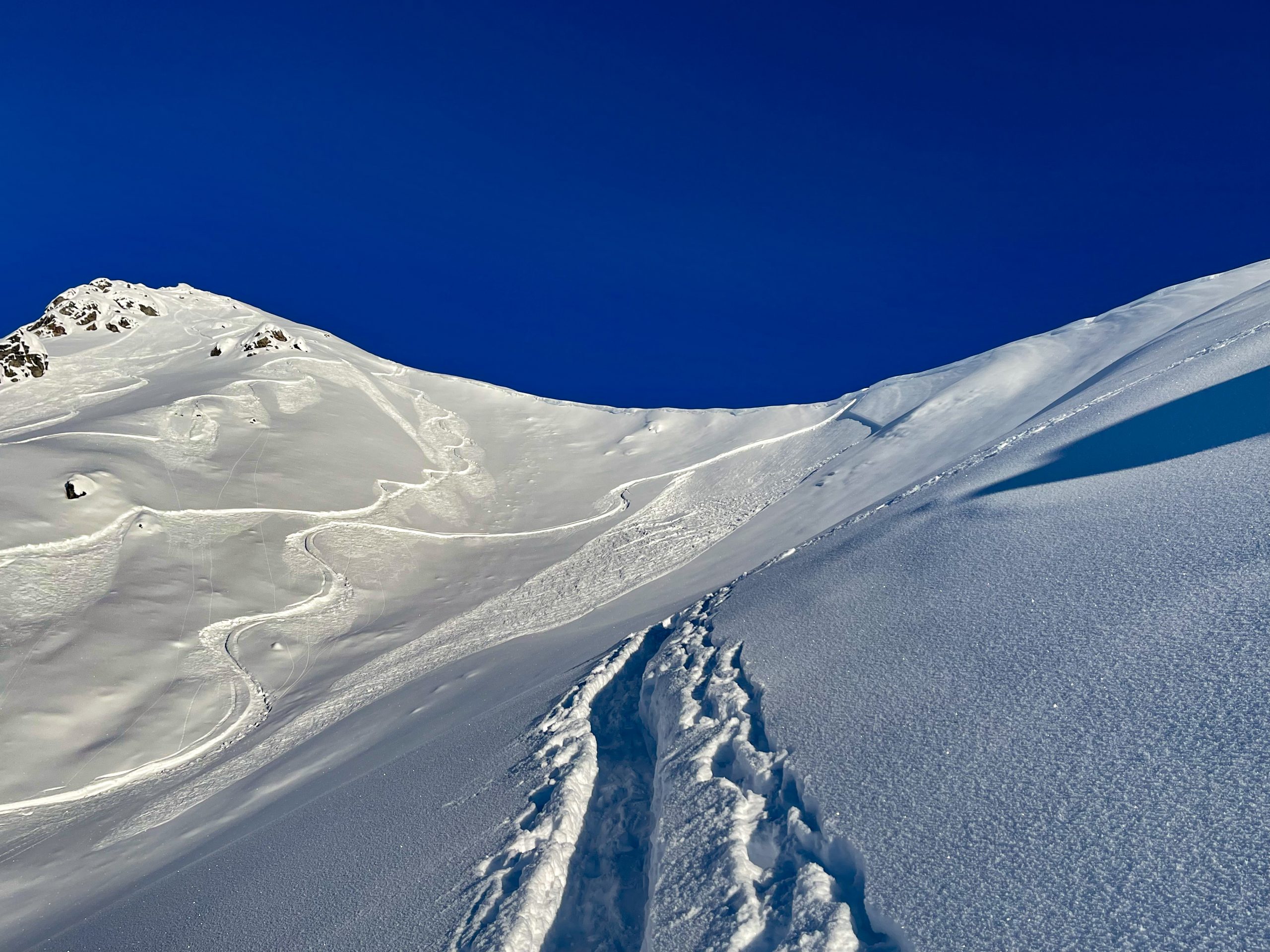 While it will be likely to human trigger loose dry avalanches on slopes 40° and steeper, any avalanche triggered will be small in size, and relatively harmless. Today’s moderate rating is based not on the size of  anticipated avalanches, but by the sensitivity of triggering this problem and its widespread distribution.

10″ of new snow sits on older, faceted, weak crystals, which are not bonding well to the new snow, allowing it to slide easily. The new snow is extremely low density, so it is very unlikely to act like a slab. This is our favorite avalanche problem which often coexists with the best riding conditions.

These surface instabilities are the primary concern, as the rest of the snowpack deep down lacks flaws and weak layers of concern.

Choosing slopes that lack terrain traps, have appropriate coverage over rocks, and lack deep glide cracks (which resemble moats) will significantly improve your safety. Loose dry avalanches will be small and relatively harmless, however, it may be possible to get caught and swept into other hazards which will compound the risk.

Cutting test slopes with your skis, board, or machine is a good way to test for loose snow sensitivity. It’s best to start on smaller test slopes with limited exposure, before stepping up to bigger slopes. This can also aid in cleaning off loose snow slides and clearing a safe path before committing to a larger slope. Skill is required to perform these cuts properly and safely, but once mastered this mitigation technique can be very effective.

In this video we conduct a quick and efficient test for cohesion in the upper snowpack. The test reveals what we have found all over hatcher pass, loose, unconsolidated snow. It is important to note here that the mid and lower snowpack contain no weak layers or flaws, and so our focus is on the new/old snow interface.

A few isolated, recent storm slabs failed at the tail end of the 11/11 storm which brought about 10″ of new snow. This snow was very low density, approximately 5-7% water. The snow is struggling to act as a slab, and generally lacks the cohesion to behave as such.

As we look to the future, you can expect these cold temperatures to continue, which will also continue to weaken the new snow, keeping it soft and fluffy, and not behaving like a slab. Winds are forecasted to remain calm through the weekend, however, if wind speeds were to pick up above 15 mph for any sustained amount of time, the avalanche hazard would quickly rise. Low density snow can easily be transported by wind, creating dangerous, cohesive slab avalanche conditions.

This forecast is a stepping off point for your evaluation in the backcountry. If you get deeper into the Talkeenta Mountains and further from the road corridor, make sure to continuously re-evaluate the snowpack for possible slab avalanche conditions. If you encounter any shooting cracks or whumphing, this is a red flag for slab avalanche problems, and these areas should be avoided or require more evaluation of the problem and risk.