We continue to be in a unique avalanche paradigm, with areas of very good stability mixed with specific locations that contain glide avalanche hazards, which are unpredictable and dangerous, but are fortunately fairly easy to identify and avoid.

Natural glide avalanches are unlikely, but may be possible in isolated occurrence today. Any glide avalanche will be large enough to bury, injure or kill a person. Avoid being under, on, or near glide cracks and old glide activity. Avalanches may run farther than you think.

The avalanche hazard is LOW today, due to the observed reduction in natural glide avalanche activity over the last two weeks, but glide avalanches are still possible and threaten many common travel routes in the backcountry and along the road corridor. Look up and steer clear.

The avalanche hazard is expected to remain the same with no rapid or large changes in the weather through the weekend.

No new avalanches observed this week.

This includes no new glide avalanches. Some glide cracks have expanded. It appears that glide activity has subsided this week, however you should still be extremely cautious and avoid any areas with glide cracks.

People are still getting out and poking around the backcountry looking for isolated pockets of good riding, which do exist. There has been a decent amount of snow machine traffic along the Archangel motorized access with no resulting avalanches observed. 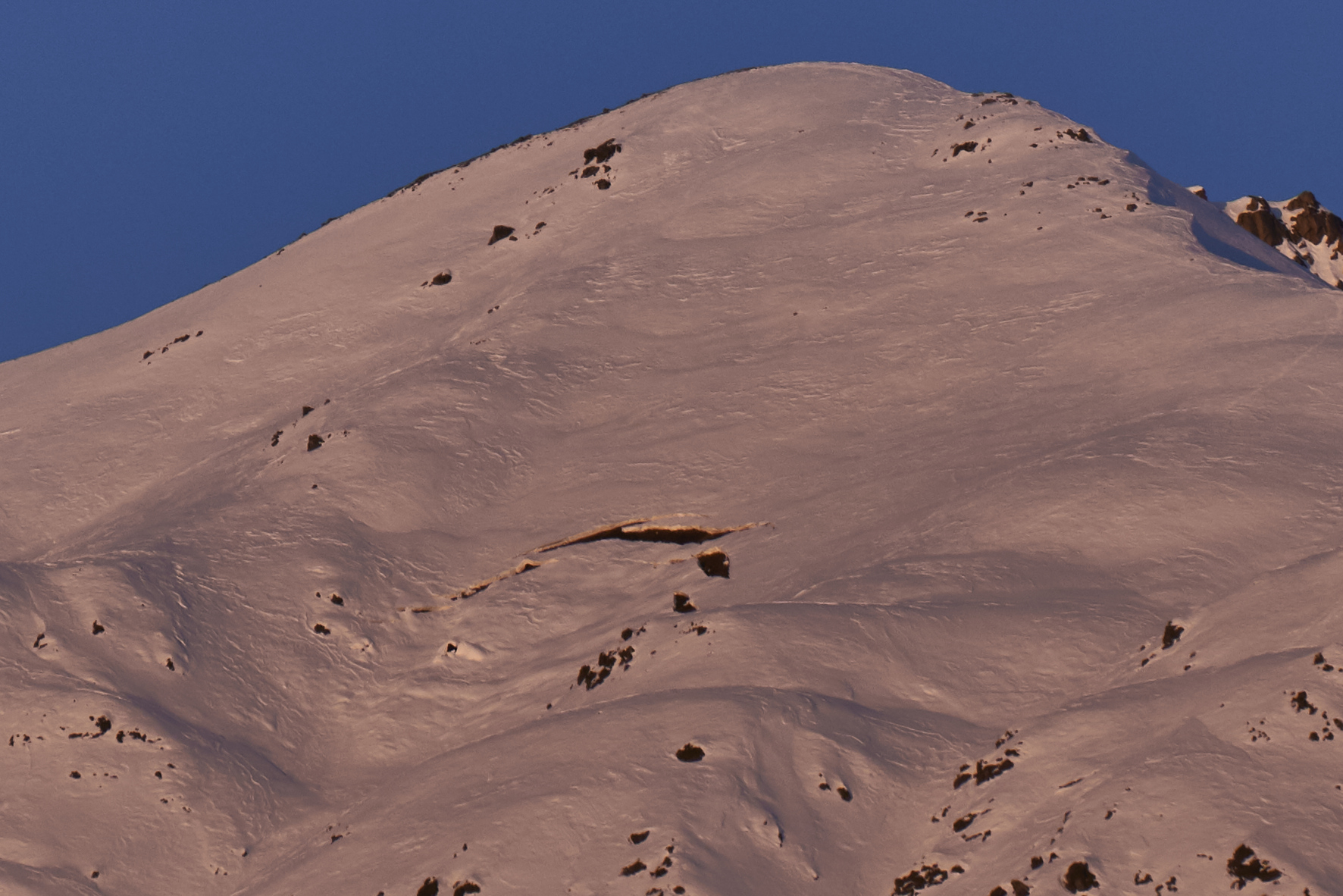 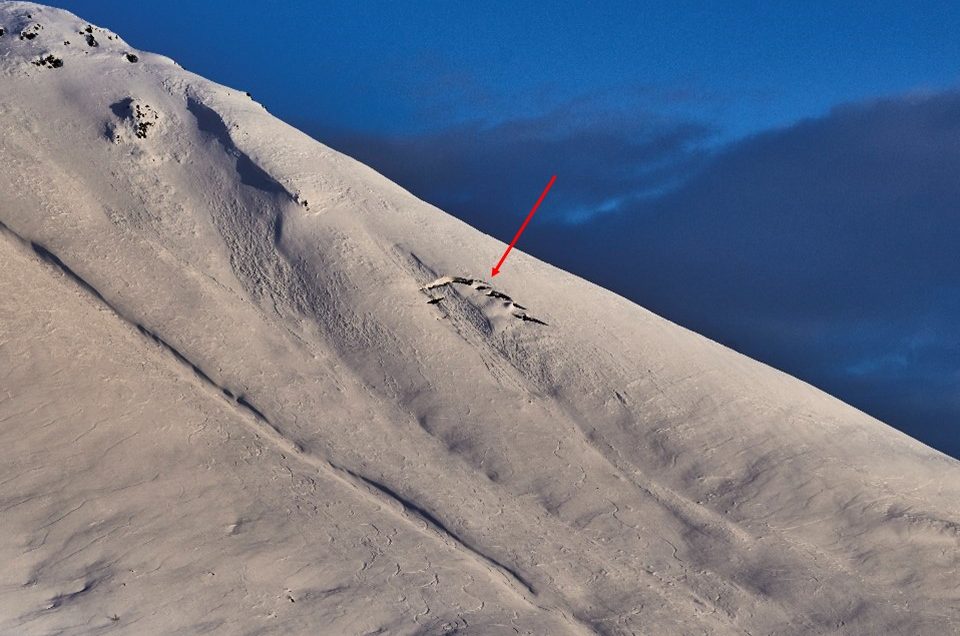 This picture, taken last week, identifies a known glide crack which has continued to expand this week on the SW face of Marmot, hanging above the motorized trail, and common traverse back to the Fishhook Lot.

Hatcher pass continues to suffer from widespread wind damage to the snow surface from a wind event two weeks ago. The best “recycled” powder is in the mid elevations bands in areas that have more wind protection. Recent cold temperatures and the faceting process are slowly improving riding conditions in the top 6-8 inches of the snow surface.

Avalanche Problem 1
Glide Avalanches
Glide Avalanches are the release of the entire snow cover as a result of gliding over the ground. Glide avalanches can be composed of wet, moist, or almost entirely dry snow. They typically occur in very specific paths, where the slope is steep enough and the ground surface is relatively smooth. They are often proceeded by full depth cracks (glide cracks), though the time between the appearance of a crack and an avalanche can vary between seconds and months. Glide avalanches are unlikely to be triggered by a person, are nearly impossible to forecast, and thus pose a hazard that is extremely difficult to manage.
Likelihood of Avalanches
Terms such as "unlikely", "likely", and "certain" are used to define the scale, with the chance of triggering or observing avalanches increasing as we move up the scale. For our purposes, "Unlikely" means that few avalanches could be triggered in avalanche terrain and natural avalanches are not expected. "Certain" means that humans will be able to trigger avalanches on many slopes, and natural avalanches are expected.
Size of Avalanches
Avalanche size is defined by the largest potential avalanche, or expected range of sizes related to the problem in question. Assigned size is a qualitative estimate based on the destructive classification system and requires specialists to estimate the harm avalanches may cause to hypothetical objects located in the avalanche track (AAA 2016, CAA 2014). Under this schema, "Small" avalanches are not large enough to bury humans and are relatively harmless unless they carry people over cliffs or through trees or rocks. Moving up the scale, avalanches become "Large" enough to bury, injure, or kill people. "Very Large" avalanches may bury or destroy vehicles or houses, and "Historic" avalanches are massive events capable of altering the landscape.

We are currently down-rating this hazard from last weekend due to a reduction in observed glide activity over the past two weeks. Glide avalanches are still possible, but we think the likelihood is lower today.

Glide avalanches are unlikely, but could occur on all aspects, at mid to upper elevations. As an additional heads up, consider the isolated possibility of a mid elevation glide crack releasing and running out into the low elevation band. Glide avalanches release the entire snowpack depth as a unit, are often large volume, and can run farther than you may anticipate. Fortunately, glide cracks are easy to identify and therefore fairly easy to avoid. See pictures above and in this seasons observations for examples glide cracks, also known as “brown frowns”, and glide avalanches. 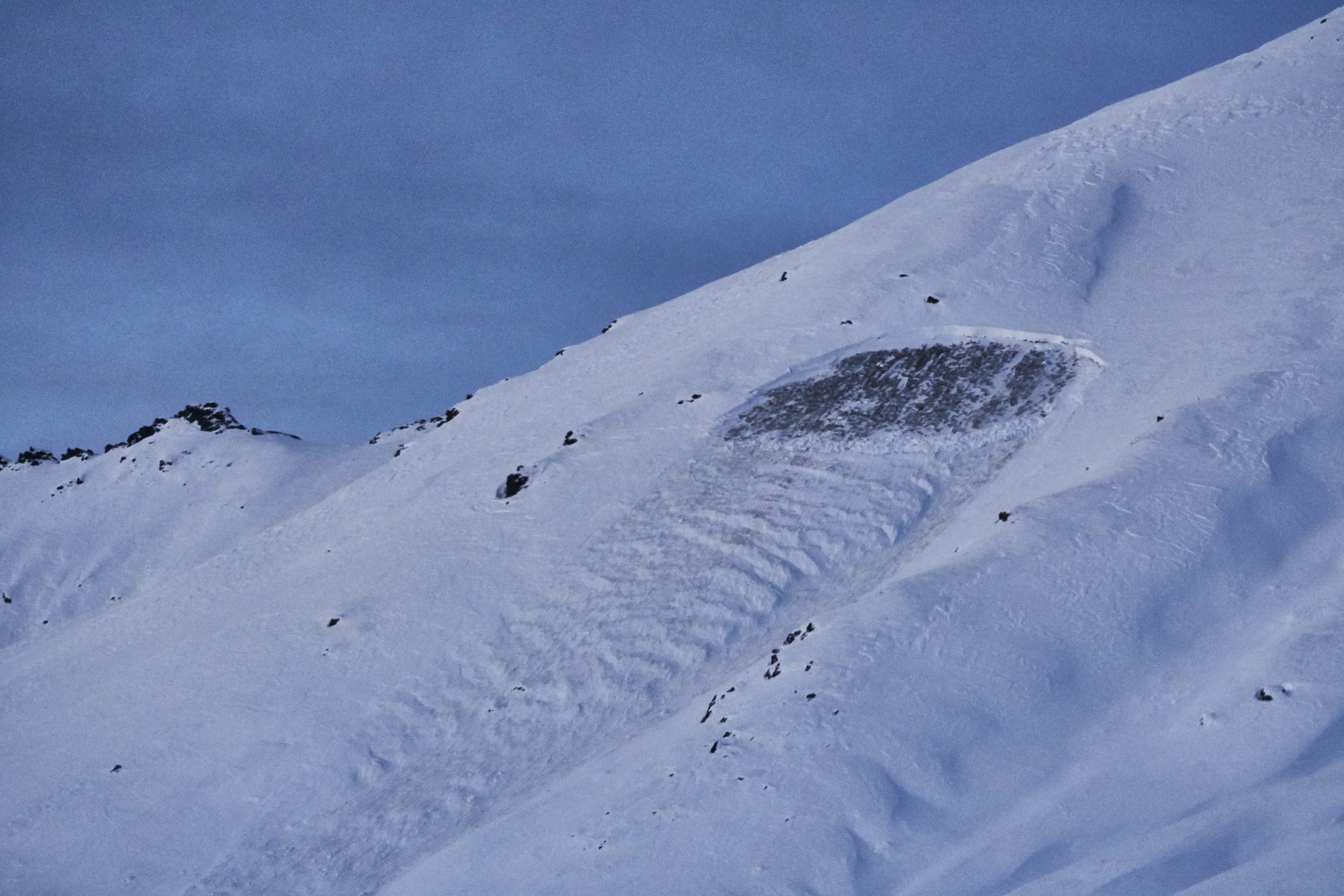 An older glide avalanche on the southern aspect of Hatch Peak is highly visible from the road and gives you a sense of the scale of this hazard.

Given the uncertainty about the timing of glide avalanche release, continue to play it safe and avoid this high consequence hazard. Avoid travel under, on, or near any areas with glide cracks or old glide activity. There are a number of glide cracks hovering over common travel routes at HP. Make sure to look up and avoid these hanging hazards. This includes the SW face of marmot, above the motorized trail, and the SE face of Skyscraper, over the winter road to HP proper.

Colder temperatures are forecasted through the weekend with calm to light winds. Starting Sunday we may get some clouds as a new low pressure system affects our area. This may bring limited amounts of snow, and is not expected to be a large snow producer. The avalanche hazard will stay the same with no rapid or large changes in the weather over the weekend.