A MODERATE hazard for human triggered avalanches 1-4 feet deep at mid to upper elevations will be possible to trigger this weekend and tricky to predict. Warning signs, such as whumphing and shooting cracks, may not be present.

Moderate avalanche hazard does NOT equal safe conditions everywhere. Deciphering the avalanche puzzle will be complex, with large (D2), human triggered avalanches possible on a multitude of weak layers in the snowpack for an avalanche to choose to fail on.

No new avalanche activity since Wednesday as noted in the Mid-Week report listed below: 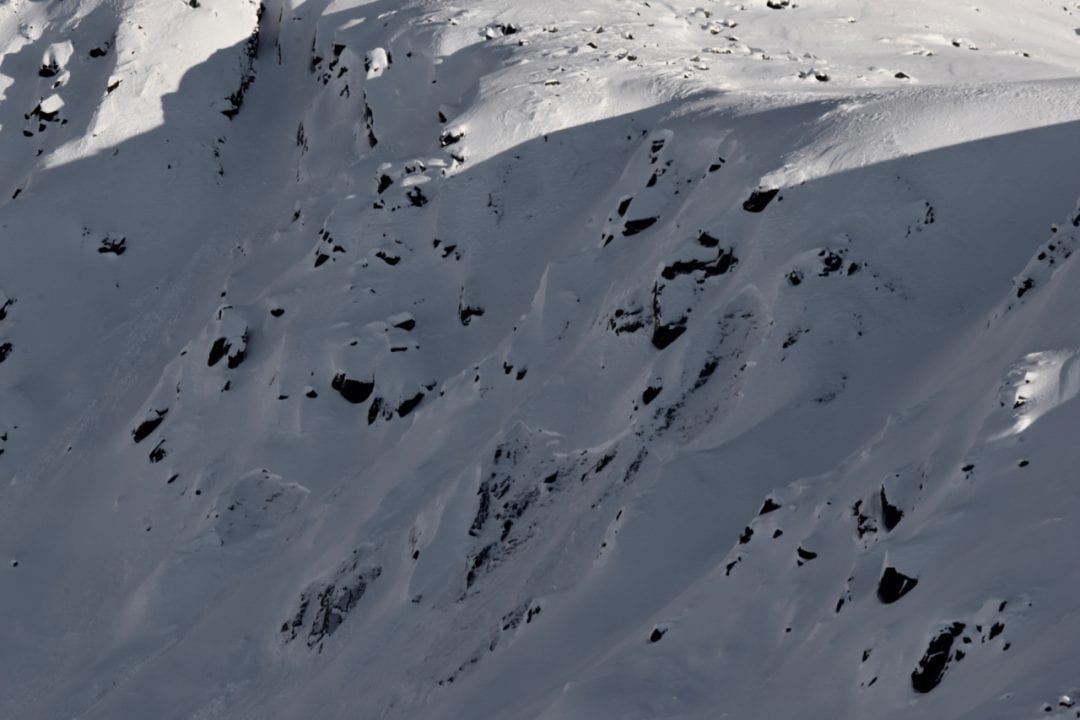 Above: Natural avalanches on Lower Microdot NW aspect on Wednesday 12/19 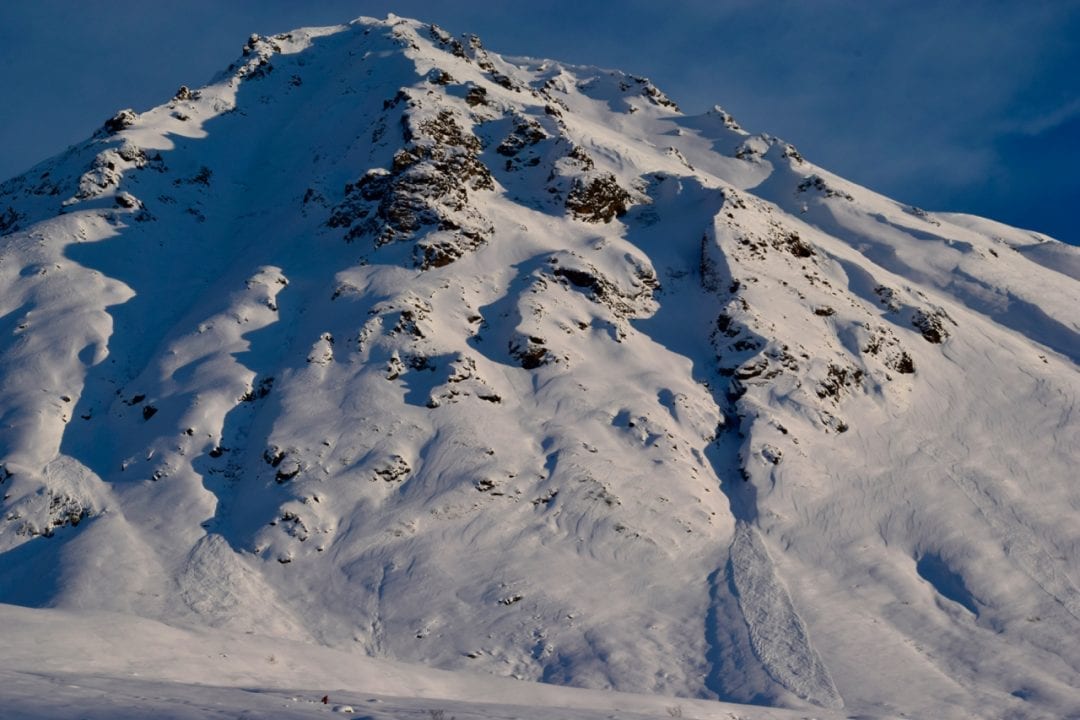 Above: Natural avalanches observed on Marmot W to SW aspects on Wednesday 12/19 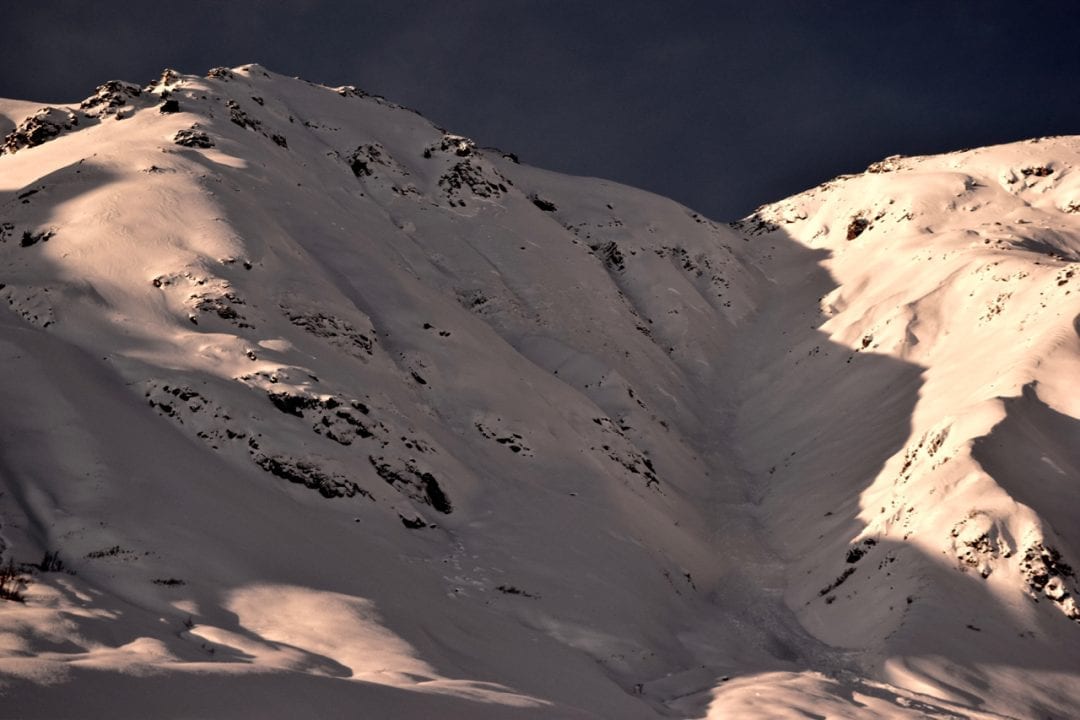 Stability has increased very slowly over the last two weeks, and significant flaws in the architecture of the snowpack remain. While the probability of triggering an avalanche has decreased, the consequences have not. Avalanches will be possible and difficult to predict.

A MODERATE avalanche hazard at mid to upper elevations exists on all aspects but predominantly on previously wind loaded, 35º+ slopes, generally, West to North, at upper elevations, where stubborn to trigger, soft and hard PERSISTENT SLABS , 2-4 feet deep sit on a variety of widespread and high continuity weak layers within the snowpack, including basal facets, facets above a melt freeze crust, and buried surface hoar. Persistent slab avalanches may be large enough to bury, injure or kill a person (D2). In isolated locations at upper elevations, it may be possible to trigger hard slab avalanches from below, and/or on flat, connected or adjacent terrain.

The current avalanche hazard at HP will be tricky to assess for the average user and challenging for experts. You may assess one area that has good stability, only to change an aspect or turn a corner and unknowingly find more dangerous conditions. When the snowpack demands this level of puzzle mastery, it’s time to hedge our bets by choosing terrain that is forgiving and leaves us with plenty of room for error. Safer terrain and is found on slopes 25º and less and out of the runnout of steeper slopes from above. Avoid large slopes with terrain traps, such as cliffs, rocks, and constrained terrain such as ravines, gullies and creeks. Use safe travel protocol when in or under avalanche terrain.

Dangerous terrain trap.  A low probability, but high consequence situation. Here is a video showing a large slope, that if triggered, would flush all of its volume into a tiny ravine at the base of the run. Hatcher Pass is full of similar terrain, and many of these are locations of past avalanche fatalities. Triggering an avalanche in this type of terrain leaves little chance for surviving an avalanche.

Extended Column Test (ECT) below on Marmot Mountain. This video first shows the stubborn, old, wind slab hazard and then shows the high energy, propagating, persistent slab, which is the primary concern:

Avalanche Problem 2
Wind Slabs
Wind Slab avalanches are the release of a cohesive layer of snow (a slab) formed by the wind. Wind typically transports snow from the upwind sides of terrain features and deposits snow on the downwind side. Wind slabs are often smooth and rounded and sometimes sound hollow, and can range from soft to hard. Wind slabs that form over a persistent weak layer (surface hoar, depth hoar, or near-surface facets) may be termed Persistent Slabs or may develop into Persistent Slabs.
More info at Avalanche.org

Isolated pockets of stubborn to unreactive wind slabs are 4-10″ thick sitting on low density snow and near surface facets at upper elevation ridgelines and cross loaded features, on leeward slopes, generally West to North. Wind slabs will be stubborn to unreactive to trigger on slopes 35º and steeper and will generally be small in size. Be cautious as triggering a small winds slab may be able to carry you into terrain traps.

Light winds are forecasted today and overnight. Keep your eye on the wind speeds and watch for plumes at upper elevations ridgelines. Stronger, sustained winds could increase this hazard.

Pictured below: Localized cracking, triggered from stomping with skis, on the SW side of Marmot Mountain ridgeline, about 4000′, with two different, old wind slab layers: 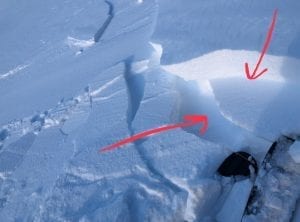 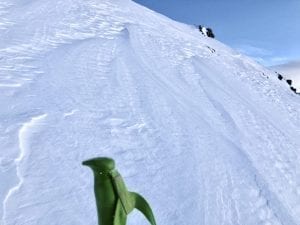 NWS is forecasting cool temps, no new snow and light winds today and overnight. This kind of mediocre Alaska weather will not increase the avalanche hazard today.

Instability will increase with any new, rapid load, such as precipitation and/or wind loading. Keep a close eye on the weather, as our current snowpack only needs a little extra load to increase the avalanche hazard again.