Winds from last week have created hard stiff slabs. These hard slabs will allow you to travel out onto a slope before fracturing above you. Remote triggering an avalanche will still be possible.

This week we had a near miss involving a large persistent slab avalanche. This avalanche occurred on a south facing slope, continuing a pattern over the last month of human triggered avalanches on south facing slopes at the upper elevation.

Rocks and other hazards are still thinly buried, these hazards will increase the consequences of being caught in an avalanche. If you do get caught it is very likely that you will be swept through rocks and sustain traumatic injuries. 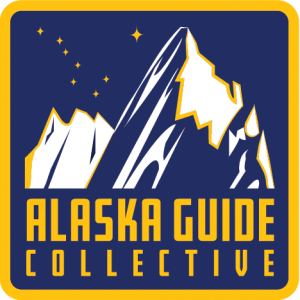 Thanks to our sponsors.
Thu, December 31st, 2020
Recent Avalanches

On 12/29 there was a near miss on Microdot S/SW 4400’. A solo rider triggered a persistent slab avalanche, the hard slab fractured above the person. Luckily the rider was able to out ski the slab and avoided hitting any rocks during the escape. Debris from this avalanche was up to 9’ deep in places.

Right next to this avalanche(same aspect and elevation), was a natural avalanche that occurred on 12/22. It is common when dealing with persistent slab problems, for slopes to remain sensitive to human triggers for days or even weeks after a loading event. This is the reason that you keep seeing persistent slab problems in the forecast and conditions summary. Click this link for more info on this avalanche. 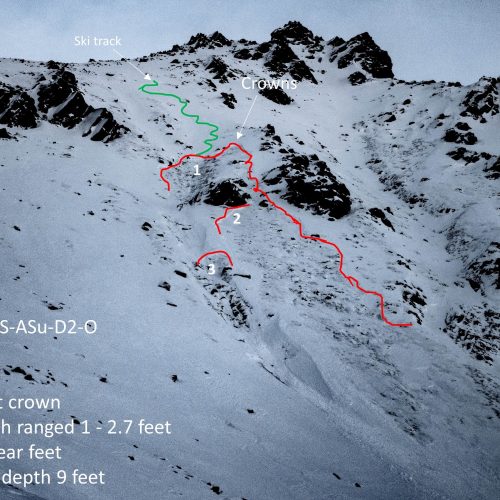 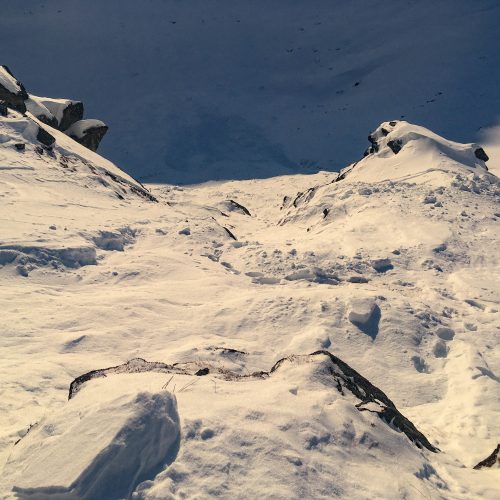 Looking down the avalanche path with lots of exposed rocks. These rocks increase your chance of traumatic injury. 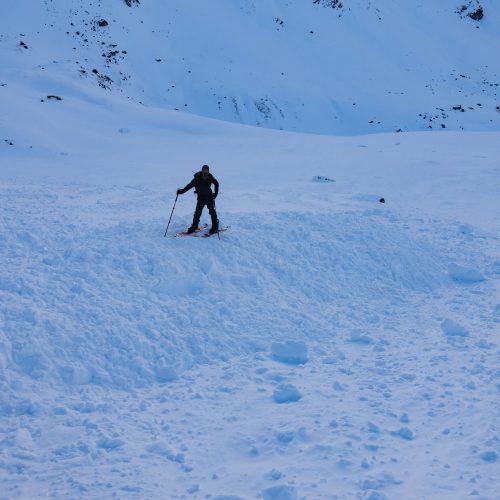 The debris was up to 9 feet deep in places.

Avalanche Problem 1
Persistent Slabs
Persistent Slab avalanches are the release of a cohesive layer of snow (a slab) in the middle to upper snowpack, when the bond to an underlying persistent weak layer breaks. Persistent layers include: surface hoar, depth hoar, near-surface facets, or faceted snow. Persistent weak layers can continue to produce avalanches for days, weeks or even months, making them especially dangerous and tricky. As additional snow and wind events build a thicker slab on top of the persistent weak layer, this avalanche problem may develop into a Deep Persistent Slab.
Likelihood of Avalanches
Terms such as "unlikely", "likely", and "certain" are used to define the scale, with the chance of triggering or observing avalanches increasing as we move up the scale. For our purposes, "Unlikely" means that few avalanches could be triggered in avalanche terrain and natural avalanches are not expected. "Certain" means that humans will be able to trigger avalanches on many slopes, and natural avalanches are expected.
Size of Avalanches
Avalanche size is defined by the largest potential avalanche, or expected range of sizes related to the problem in question. Assigned size is a qualitative estimate based on the destructive classification system and requires specialists to estimate the harm avalanches may cause to hypothetical objects located in the avalanche track (AAA 2016, CAA 2014). Under this schema, "Small" avalanches are not large enough to bury humans and are relatively harmless unless they carry people over cliffs or through trees or rocks. Moving up the scale, avalanches become "Large" enough to bury, injure, or kill people. "Very Large" avalanches may bury or destroy vehicles or houses, and "Historic" avalanches are massive events capable of altering the landscape.

Human triggered persistent slab avalanches are possible at mid and upper elevations and on all aspects, in terrain 30° or steeper. Natural avalanches are unlikely. These avalanches will be 1-4’ thick and will be large enough to bury, injure or kill a person.

It will be easier to affect the weak layer where the snowpack is thin. One of these locations is on south aspects. In contrast,  North aspects tend to have a thicker snowpack so it will be harder to trigger an avalanche on leeward aspects. We believe that the small number of human triggered avalanches does not correlate to a stable snowpack. We have had very few users travel into steep terrain due to poor riding quality, exposed rocks, and the consequences of trigger persistent slabs. Remember persistent slab avalanches can be triggered days or weeks after a loading event.

There are several problem layers of weak sugary faceted snow sitting in the snowpack. The first layer is closer to the surface and consists of rounding facets. This layer is buried anywhere from 1-3’ from the surface. The second layer is near the ground and sits above a thin melt freeze crust. This layer consists of 1mm rounding facets and was buried on november 6th.  This sugary snow was responsible for the near miss on 12/29. The third layer is a layer of depth hoar that sits at the ground.

On top all these different layers of weak sugary snow, are hard stiff slabs. Hand pits, pole tests and instability tests will help you identify the poor structure of weak sugary snow sitting below these hard persistent slabs. Hard slabs can allow people to travel out onto a slope, before fracturing above them making escape extremely difficult. The avalanche on 12/29 allowed the rider to make several turns down the slope before fracturing above him.

Remote triggered avalanches are still possible. Use adequate spacing when traveling uphill, ride down one at a time, spot your partners, and choose safe zones that are out of harm’s way. Avoid any terrain that appears to be cross loaded and choose slopes with safe runouts that are not above any terrain traps.

Cornices have grown very large on some ridgelines. Give these cornices a wide berth, cornices tend to fracture further back than expected. When in doubt take another step away from the cornice and make sure that you aren’t standing on top of one. 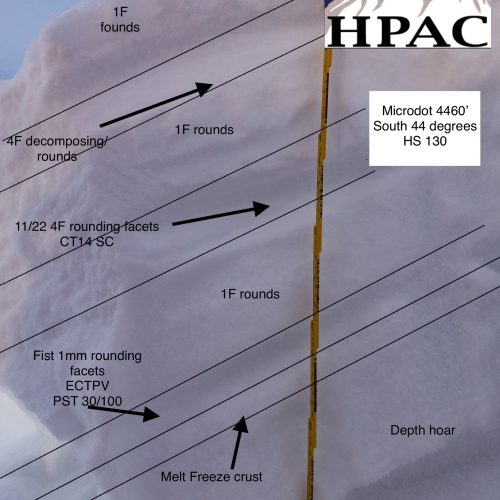 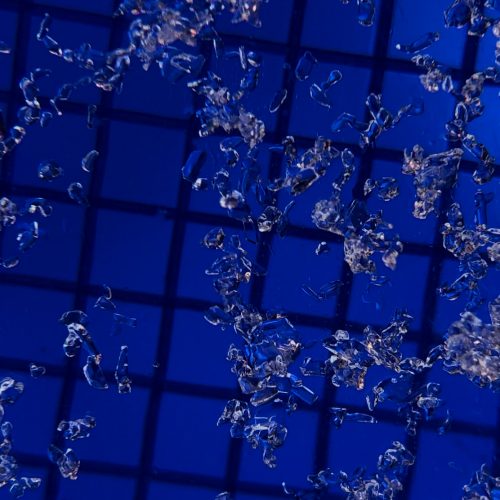 1mm rounding facets, this layer was responsible for the human triggered avalanche on 12/29 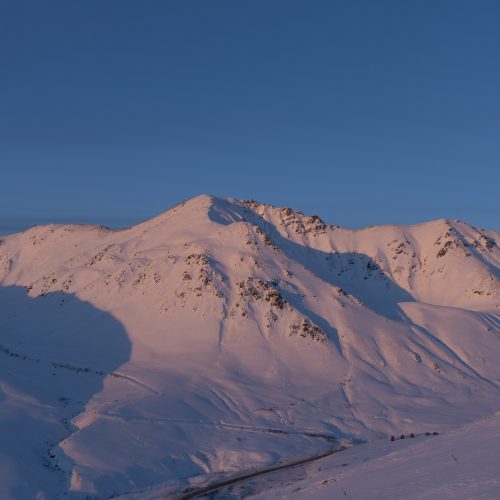 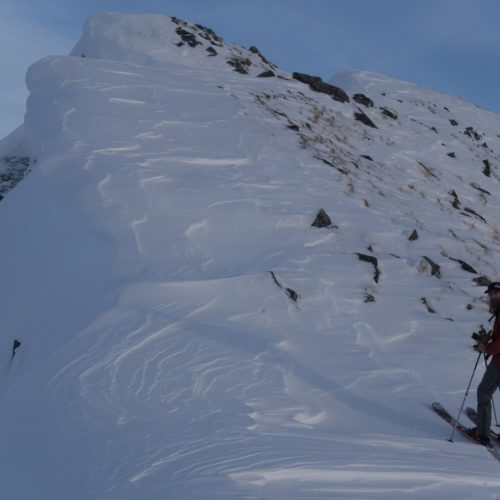 A large cornice above the Ray Wallace chutes. 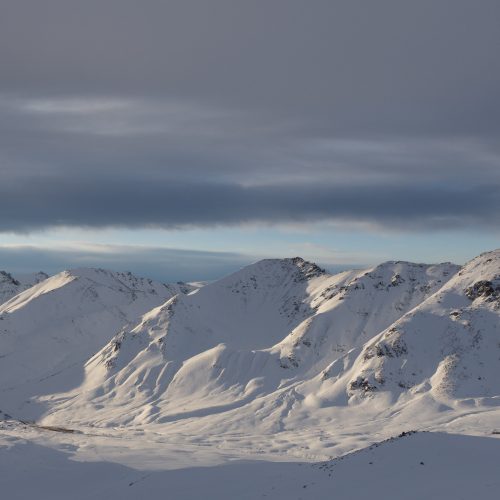 Signs of cross loading can be seen on lower Eldorado bowl

Independence mine: less than 1″ 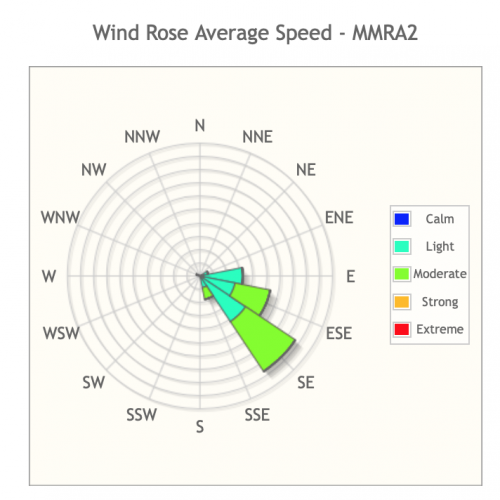 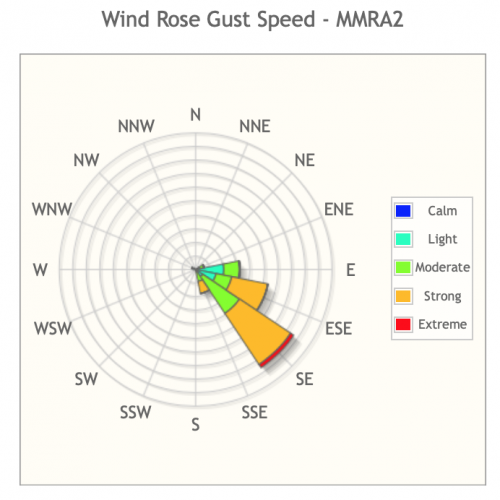