Since October 1, weather conditions at HP have been warm and wet. We currently have approximately 2 to 3.5 feet of snow at the mid to upper elevations. The snow line is visibly delineated at approximately 2500-3000´.  Cloudy skies have dominated October and November, with three significant dumps of snow, warm temperatures and light winds.

The Independence Mine Snotel weather station has not been reporting due to a server failure. We do not know when this will be back up and running, but word on the street is soon. Meanwhile, we have been able to download data manually on occasion. According to IM Snotel (3550′), from October 1 to November 8, temperatures at IM Snotel, 3550′, have averaged 32°F, with a high of 42ºF and a minimum of 21ºF.  Winds averaged 3 mph and gusted to 21 mph, with an average SW direction.  October-November delivered three significant storms each accumulating over 12″ of snow. Total snow water equivalent was 9.5″ with 52″ of new snow.  The relationship between SWE and total new snow should be keying you into the unseasonable warmth we have been experiencing. Based on a forecasting rule of thumb, we should have received about 95″ of snow, if temperatures had remained below freezing during storm cycles.

Recently, warm temperatures and rain, followed by cooler, freezing temperatures have resulted in a thin crust (Nov.2) all the way up to 5000′. This crust is supportable to breakable and makes riding very difficult. It’s also extremely loud when sliding on it. You can hear people riding down the mountains from the parking lot. We recommend protecting yourself with “crust muffs“. 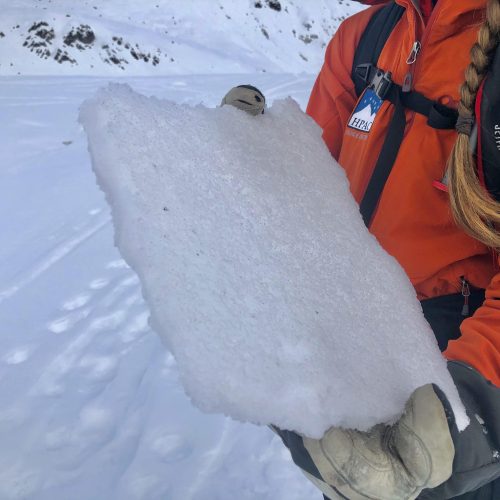 For November 7,8, and 9, overnight temperatures remained above freezing at the Marmot weather station, 4500′.

Wet avalanches have dominated the start to the season. Staying safe in the backcountry has mostly involved avoidance of glide crack and glide avalanche locations. As the Chugach Avalanche Center likes to call them, “Brown Frowns”. See the observations page for numerous pictures and reports. Predicting the timing of Glide Crack release involves a lot of uncertainty and we are likely to see continued releases.

Nov 12, 2019. Red arrows indicated Glide Cracks and Glide Crack avalanches. Black arrows include names of significant peaks and areas. Photo taken from the groomed x-country trail on Independence Mine Road, looking South. We recommend cataloging the location of these Glides for the future.

Even though it is winter in Alaska, the snowpack looks more like a springtime snowpack.

Wet avalanches are the main concern until we enter a colder prolonged weather cycle. 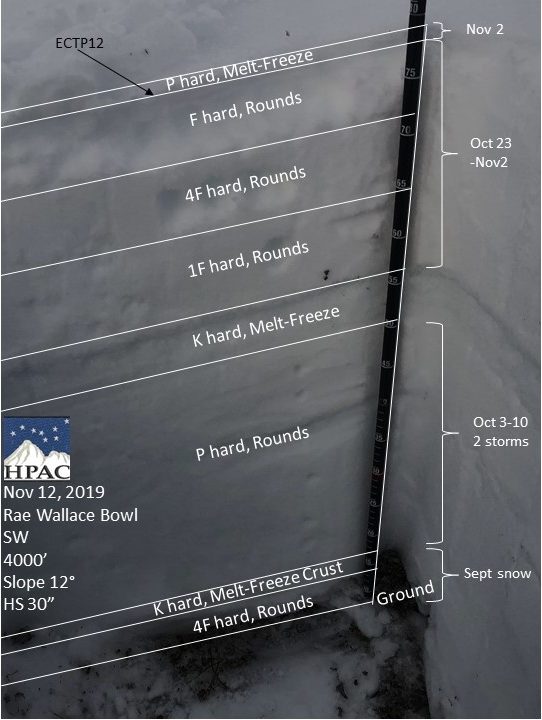 The only propagation results we found were under the surface crust.

Thanks to our sponsors.